Country of Production:  Austria, U S A

Country of Filming:  Austria, U S A

This movie was shot on 16mm black and white reversal film stock procured from FOMA in Prague and processed at their factory. When that special arrangement with their laboratory dried up, the exposed film rushes were then dispatched to a renegade film worker in Prague who processed the material by hand in a makeshift lab.

This film was started as a study in intrigue infused with cross-cultural and poetic gradients. Inspired by Urania, the muse of the heavens, her avatar descends from the Bardo plane to earth in the guise of a disaffected American girl adrift in merry, sinister old Vienna. The movie is conceived of as the first in a triptych of episodes drawing from the silent screen tradition of serial cinema pioneered by Louis Feuillade. Yet, the film exists out of time and essentially off the grid.  - Tav Falco

Richard Pleuger graduated under Nam June Paik at the Art Academy Düsseldorf. During a grant at George Kuchar's film class at the San Francisco Art Institute he directed the music video "Shade Tree Mechanic" with Tav Falco in Memphis. After his debut as an author of "How Movies Are Made", a benchmark book on the film production process, he worked as a correspondent in Hollywood and on his photography. He lives in Los Angeles and Munich. 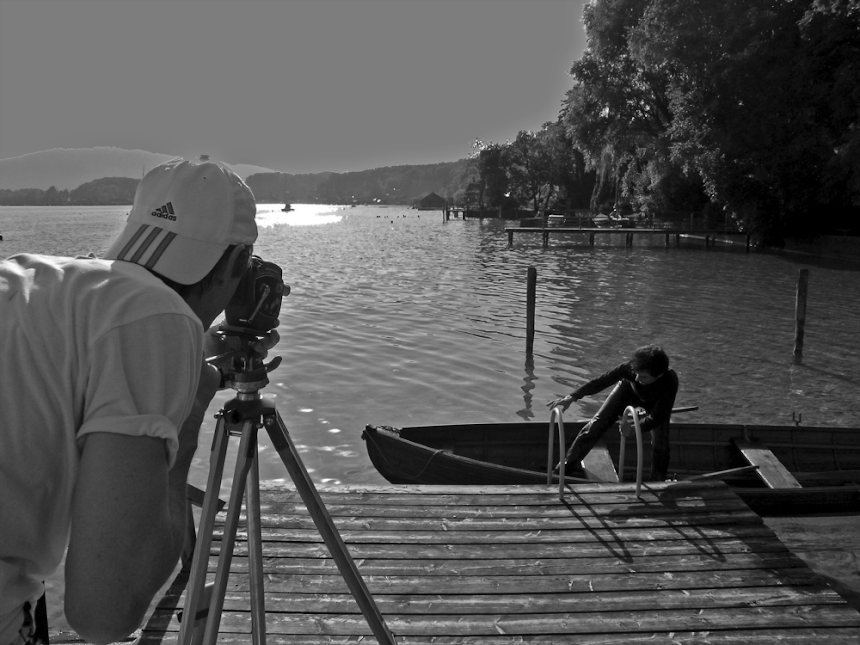 Falco was raised in the country, between Whelen Springs and Gurdon, Arkansas, and moved to Memphis, Tennessee, in 1973. He started the nonprofit Televista "art-action" video group in Memphis to document local musicians and artists in the miid-1970s with fellow Arkansas poet, performance artist, and videographer Randall Lyon. Falco and Lyon were both mentored by noted Memphis color photographer William Eggleston. Alex Chilton was impressed by a 1978 performance of Falco’s at The Orpheum Theater in Memphis that culminated in the chain sawing of a guitar. The two teamed up musically and evolved into the self-styled "art damage" band, Tav Falco’s Panther Burns, naming the group after a legendary plantation in Mississippi. The group recorded a first album for Rough Trade called, Behind the Magnolia Curtain.

Just as he began his early career documenting other artists using video and photography, Falco devoted some of his musical career trying to bring attention to great traditional artists obscured from the media's view. He introduced their work to his audiences and to writers following his work by performing Panther Burns shows on billings with these artists, recording interpretations of their songs, and occasionally collaborating with some of them on projects for small record labels he's been associated with, like Au GoGo and New Rose. Among these artists were blues woman Jessie Mae Hemphill and rockabilly pioneer Charlie Feathers. Falco and Lux Interior of The Cramps worked on the photography and liner notes, respectively, for the 1982 Honky Tonk Man album by Feathers, whose exuberant, hiccup-styled vocals from the 1950s influenced both vocalists. Others of his music heroes who have performed at Panther Burns events include Cordell Jackson, R. L. Burnside, Mose Vinson, and Van Zula Hunt.

Falco has appeared as an actor in cameo roles in films such as Great Balls of Fire! (1989 -USA), the Big Post Office Robbery (1992 -Hungary), Highway 61 (1991 -Canada), Downtown 81 (2001 -USA), and Wayne County Rambling (2002 -USA). Long an aficionado of the tango under European and Argentine instructors, he also appeared in Dans Le Rouge du Couchant (2003-France) as a tango dancer, choreographing his part in the film, and in Jardin Kennedy (2009 -France) with Clotilde Courau and Tàmàs Lemarquis, directed by Raphael Gianelli-Meriano.

Several short films he has appeared in, most of which he has produced and in some cases served as the filmmaker, have been shown in underground arts venues like The Horse Hospital in London. In 2003 six of Falco's short films were accepted and archived into the permanent collection of the Cinémathèque Française in Paris. The short films archived are Love's Last Warning (1996), Born Too Late (1993), Helene of Memphis (1991), Memphis Beat (1989), Shadetree Mechanic (1986), and 71 Salvage (1971). A selection of Falco’s short films was shown in retrospective at the Cinémathèque Française in 2006. He has now completed a feature length film entitled, Urania Descending.

Falco has said his main artistic purpose is "to stir up the dark waters of the unconscious."